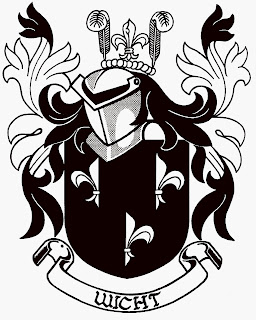 When translated the blazon describes the original colours as “ Black; three gold half fleurs-de-lis placed two over one; the first and third the left half; the second missing the right half.” Above the shield and helmet is the crest that is described as: “A gold fleur-de-lis between two silver ostrich feathers.”

Although the Wicht name is an old and respected one, it had a humble beginning. First referred to in the 9th century, the surname Wicht appears to be characteristic in origin. In old High German a 'Wiht' meant a creature or a thing, whereas in modern German ‘Wicht’ is a cognate, meaning ‘small person’, ‘dwarf’, and also, unfortunately, ‘unpleasant person’. J. R. R. Tolkein, in his Lord of the Rings trilogy, named the little wraiths that lived in his forests the Barrow-Wichts. Spectral creatures similar to the Barrow-Wichts have even found their way into computer games such as the ‘Dungeons and Dragons’ Wights. However, since there is no point in being too finicky about metaphors, I prefer ‘one who was mischievous.’ More agreeably, during the eighties German television featured a couple of impish characters similar to those seen on Sesame Street that were known as the Munich Wichts (der München Wichts) as ten second fillers between commercials. Although these interpretations are the result of onomastic research, there may be many other meanings for the Wicht family names, as well as other ways of spelling such as Wight, Wichte or Wichter.

According to Halberts Family Registry, at last count (1986) there were about 4,500 Wichts divided amongst 1,209 registered Wicht households scattered about the world. 204 in the United States (mostly in Minnesota), 6 in Canada (mostly Ontario), 42 in Australia (NSW), 10 in New Zealand (North Island), 1 in England (Berwickshire), 35 in Austria (mostly Steiermark), 955 in Germany (mostly Nordrhein-Westfalen), 389 in Switzerland (mostly Freiberg), 18 in France (mostly Grad), 5 in the Netherlands (Zooid-Holland), 1 in Italy (Parma) and 35 in South Africa, mostly in the Cape.

These figures are obviously inaccurate as there are certainly many more than 35 Wicht family homes in RSA, and, for example, there are at least 20 Wicht family households in Russia that are not even included in their list. However it's a start. If anyone knows of a more recent census please let us know.
1 comments