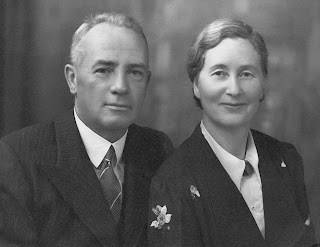 Johan Hendrik Wicht, the third Wicht to be christened Johan Hendrik since the Hans Heinrich arrived in South Africa, was born on the family farm, Schoongezicht, near Stellenbosch on 5 March 1888. At the time the farm was being rented, but his father, Johan Hendrik 11, bought the property, then still primarily a dairy farm, in sections from it’s two current owners, Catherina D’Olivera and Jan Beyers between 1892 and 1993. The second purchase included the home, Lindushof, on Van Riebeek Street in Stellenbosch. At the time Schoongezicht was still primarily a dairy farm, although several of the previous owners had introduced grapes nearly 200 years earlier. He was just 20 when his father passed away in 1908, leaving him to take the reigns. The estate finally transferred Schoongezicht to him in July 1914,
In 1910 he married Johanna Cornelia Claasens. The daughter of Mr. and Mrs. J. H. Classens, she was born in Victoria West on 23 December 1891. It was rumoured that she and her Mother spent some time in an English prisoner of war camp during 1899. She was educated at Bloemhof, Stellenbosch where she showed a special talent for music, particularly singing and piano. Johanna was also of Cape decent and her traced their roots back tome of the Capes oldest families, including the Hofmeyrs and the Hertzogs. At the time they met she was living with her parents in their lovely home on Dorp Street, one of the many that have since been restored. She was the first student to obtain a singing licentiate (RPOD) in the Cape after studying at the Mowbray Training College for three years. Throughout her life she maintained a keen interest in both music and amateur theatricals and often stayed at Lindushof when she was performing. Three of their children were born at Schoogezicht; two daughters, Joan on 15 February 1917 and Louis on 15 February 1919. Their first son, Johan Hendrik IV was born there on 20 December 1920, shortly before the farm was sold.
The fourth child, Annalise, was born on 11 June 1992 after the Wichts trekked into Stellenbosch and moved into Lindushof. The home, built by Jan Beyers, had by then served the family as a Town House for several years, although some rooms were rented to Stellenbosch University students. When they sold the house it went on to become a student girl’s dormitory and today having been rebuilt is known as ‘Heemstede’. The large home, situated on four acres, was a legendary showpiece in the town. It had three gates, front, back, and a separate path to the smoking room. There were beautiful gardens surrounded by tall pine trees. Peacocks and Cranes strutted across the lawns, and occasionally a small monkey could be seen peeking through the oak leaves. Some pine trees had to be removed simply to allow for the furniture to be brought in, and later for a tennis court to be built. Lindushof also had its own dairy to produce butter and milk for it’s owners from cows that roamed the open land lower down the hill. Once Lord and Lady Claredon, then Governor General, who had come to open the agricultural show of which Oupa was the chairman, visited there and a full-scale orchestra was set up in the garden to entertain the dozens of guests who had come for the afternoon.

As a farmer Johan Hendrik, or ‘Oupa’ as was he was become to be known, had a wide range of interests. He was a keen participant in agricultural shows where, amongst other things, he became a champion at racing his cart and horses. During the twenties and the thirties he worked his way up to becoming a director of the Paarl Board of Executors, and subsequently to serve on the board of the Stellenbosch District and Boland Bank. As if not busy enough he spent six years as a member of the Stellenbosch Divisional Council as well as the School Board. He represented Hottentots-Holland electorate in the Provisional Council and was on the Western Province Executive Committee for twenty years. Oupa also earned himself a position as a governor of the board of the South African Broadcasting Corporation, and Annalise proudly recalls that the her family owned one of the first radios in Stellenbosch.
At the same time Johanna, or ‘Ouma,’ became an active member of the community, becoming a member of the Hospital Board; a member of the Girl Guide Movement and the Voortrekker movement; a committee member of the Stellenbosch Golf Club and Tennis Club and a representative of the ‘Skakel’ committee and the ‘Federale Raad.’ During the war she joined the Civilian Force and served with the Radar Special Signals battalion in Green Point. After the war she opened a small gift shop in Stellenbosch where, amongst other things, they sold clothes mostly made by hand at Lindushof.
But Oupa was as much a warrior as a businessman. His military career began during the First World War when he served in the army in South West Africa (now Namibia). He maintained an interest in military affairs and was responsible for the creation of the Regiment Western Province. He was very involved in the citizen’s force where as Lieutenant Colonel in command of the Regiment Western Province he received King George V1 Coronation Medal in 1937. In 1940 he volunteered for service in the South African Army as was taken on full-time with the rank of Lt. Colonel. At different times during the war he commanded bases in Walfish Bay and Durban.

It was while serving in the Coast Watch that he heard of Saldanha for the first time. In 1942 Field Marshall Rommel’s success in the North had made the Suez Canal very unsafe, and furious preparations were being made to contain the flotilla of Allied ships passing our shores. At the time many of the South African harbours were largely maintained for the ships of the allied forces to at anchor and unwind. British submarines, minefields, searchlights, a primitive form of radar and gigantic cannons, some of which dated back to before the First World War, were used in the defence of the harbours and although German submarines claimed many ships out at sea there was never a direct attack within them.

But space was becoming a problem. Saldanha Bay was an ideal location, being one of the largest enclosed bodies of water on the African coast. Historians have remarked that it is a wonder that the colony had not been established in the convenient bay, but the near total lack of fresh water had stood in the way. Prime Minister Field Marshal Jan Smuts ordered Oupa, then Lieutenant Colonel Wicht, post-haste to Saldanha to take command of the sub-fortress responsible for the defense of the bay. Overnight the centuries old fishing was transformed into a hive of military activity, and no expense was spared laying on a pipeline from the Berg River, forty kilometers away. The South African Engineers surveyed the line and the Army, including some of the reservists and members of Oupa’s Regiment Western Province, performed the task. Despite the odds against it, the mammoth undertaking was completed in less than a year, and Oupa celebrated by tasting the first glass of water in Saldanha that had not been collected off a roof or drawn from a well. While stationed there he and Ouma lived in the Hoedjiesbaai hotel and at different times their son, Johan, and daughters Louise and Annalise visited them there. For a while Louise was stationed there as a radar operator.

Later, as the war drew to close in 1945 he was posted to ‘Zonderwater.’ the largest Italian P.O.W. camp within the Allied forces where 63,000 prisoners lived in tents. There he served under Col. H. F. Prinsloo as the P.O.W discharge officer.

After the war his interests partially returned to farming and in 1924 he arranged for the Boland Bank to fund William Winshaw to establish the Stellenbosch Farmers Winery, and later, during 1953, to rather reluctantly lend his son Johan the money pur the purchase the farm, Pienaarspoort in Saldanha which he thought would never pay it’s own way.
Ouma and Oupa retired to their home ‘Af-en-Tu’ in Gordon’s’ Bay where he carried on to became a member of the Gordon’s Bay counsel. At 78 he did in Cape Town where Annalise’s husband, Dr. Mick Baily, was treating him for a liver dysfunction. Three years later Ouma died in Gordon’s Bay aged 77.