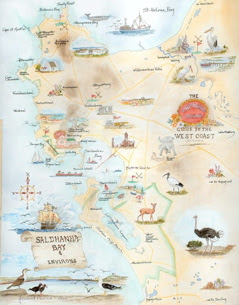 Saldanha Bay, the largest natural harbour on the African coast, has a fascinating history that includes the remains of the largest diversity of 5 million year old fossils in the world; from those of the first bear ever found in Africa south of the Sahara and the 12 million year old three toed horses, to the skull and footprints of man who anthropologists have established lived here some 120,000 years ago, while others believe they’re so old that they might be the remains of aliens. The magnificent bay with it’s five small, rocky islands echoes with the songs of the Southern Right whales, albatross squawking angrily as guano is stolen from directly beneath their feet, naval battles, piratacy, shipwrecks, piracy, and ‘Daar kom die Alabama.’

The bay has always been a popular sailing venue. Today however the tall ships have largely been replaced by wind-surfers and the kite boarders that swarm in the sky above the wide beaches of Langebaan displaying their derring-do, nerve wracking to watch while sitting on the patio of a Caribbean style restaurant sipping a daiquiri. A little further to the south the bay transforms itself into the magnificent 15 km long Langebaan Lagoon, the centerpiece of the West Coast National Park. The lagoon, being purely salt water, is unlike any other in South Africa and a wetland of major ecological importance. Here the water, protected from the natural elements, is crystal clear and amazingly balmy especially since it’s the icy Benguela current that feeds the bay.

The port of Saldanha nestles in the bay’s biggest inlet, Hoedjiesbaai, to the north. In 1835 Lord Lichenstein stated that it is a wonder that the colony had not been established in this large and convenient bay, but an almost total lack of fresh water had stood in the way. The problem was solved in 1942 when the South African Corps of Engineers proceeded to lay a pipeline to Saldanha from the Berg River 30 km further up the coast. This was done, not out of concern for the thirsty inhabitants, but to provide water to the dozens of British merchant ships that took shelter there during the war. Today there is more than enough to make the ice for drinkers in the Mykonos casino, as well as to water the three fine golf courses all within twenty minutes of the town.

During spring a stroll along the rugged West Coast becomes, to put it bluntly, like walking down a garden embankment in heaven. Almost overnight the fynbos comes out of hibernation, and the entire region is blanketed by millions of multicolored wild flowers, a breathtaking site. The event is legendry and visitors from all over the country and abroad come to appreciate it. Dozens of tours and flower shows are staged to make it possible for them to enjoy it even more at their leisure. One family where so awestruck by the bay and it’s surrounds that they decided to stay. 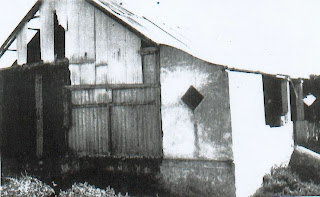 In 1956 Lt. Commander Henry Wicht and his wife, Babeta, bought property in the bay against the advice of his family and friends. ‘What,’ they asked, ‘could you possibly want to do with place?’ The ramshackle 150 year-old two bedroom farmhouse still had dung floors, an outside toilet that was in danger a falling over and, naturally, no water other than a briny well a kilometer away; and the Wichts, at that stage, already had several children to cater for. But the farm, Pienaarspoort, had five kilometers of beachfront and that was enough. Ultimately it was enough. Henry established a thriving industry collecting seaweed off the beach for export to Japan where it was processed for the extraction of agar, a natural gel used in cosmetics.

Over time the farm, that they had renamed Blue Water Bay, was sub-divided and the portion they’d retained was distributed amongst their nine children. The old shack that had by then already become an elegantly gabled home underwent further transformation is today known as Blue Bay Lodge. 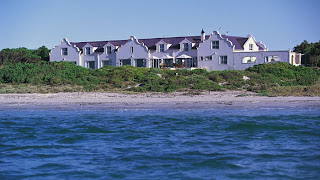 Blue Bay Lodge rapidly gained a reputation as the most popular conference facility and team-building center on the West Coast. The three conference rooms, fully equipped with the most up-to-date audio/visual equipment, can accommodate as many as 200 delegates. One of the conference rooms has a braai area, a garden and a pool of it’s own, while another looks right out across the bay. There is plenty of parking, both private and public.

The lodge offers 32 deluxe en-suite rooms at very reasonable rates. Every room has a separate entrance, which make them ideal for weddings and other formal or informal private functions. All have dstv, a hairdryer, and coffee making facilities. For those looking for a little more peace and quiet there are eight fully serviced self-catering units all within a stone’s throw from the Lodge itself. Each cottage has a private braai area, a spacious lounge with TV, and range in size from one to three bedrooms. Overnight accommodation includes a lavish buffet breakfast in the Lodge’s tastefully decorated nouvelle cuisine restaurant that offers panoramic views of the bay. The restaurant accommodates 120 diners and, while the Carte menu caters for all tastes, it features fresh seafood, home baked breads and wide variety of wines from a well-stocked cellar.
There is a games room with a pool table, table tennis, pinball and video games. For the more active, the lodge offers canoes, a tennis court, a play-park with a trampoline and, in addition to the kilometers of beachfront; two swimming pools, one that is solar heated. The friendly, professional staff can set up nature walks, horse riding, golf, sailing trips, fishing and deep-sea diving. And after a such a long day, what could be more relaxing than a massage in the Lodge’s own beauty salon that has on hand a range of body treatment packages.

Whether it's a peaceful weekend break, a holiday with your family, or a well-catered, private conference that you need, take an hour’s drive along the West Coast road - the R27 – to the West Coast’s finest.