A Lonely Father Yearns For His Daughter (1865) 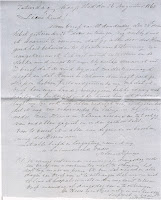 Towards the end of the long Cape winter in 1865,  Johannes Jacob Hofmeyr wrote the enclosed letter to his daughter Geertruide Aletta. Johannes was born at Welgemeend and, as the oldest surviving son, presumably still lived in the large Hofmeyr family home on the slopes on Table Mountain. Geertruide had married the "capitalist landlord" Johan Frederik Wicht and moved to Mermaid Cottage (see Rapallo in previous blog) which was then an isolated home overlooking the ocean in rural Sea Point (close where the Pavilion is now). Today it is a scant 30min drive by car but to Johannes it seemed very far away indeed. He was 54 years old. His wife, also Geertruida, had died three years earlier, which may account for his loneliness and he was "so depressed".


In his letter he frets about his grandchildren, Hennie and Johanna. Though Hans Heinrich "Hennie" died at the age of 20, Johanna, who "should be kept out of the evening air" went on to live a long and colourful life.


Johanna never married - apparently her father Johan Frederik never approved of her suitors. When her father died in 1907, he left Rapallo to his  grandchildren with the proviso, however, that Johanna, should enjoy the use of it during her lifetime. Johanna was left "comfortably" off by her father and became a well know sight in Cape Town in her chauffeured Rolls Royce at a time when few people in the city possessed motor cars. But by 1912, life in Cape Town became "intolerably provincial" for Johanna and she packed up and went to her car, chauffeur and aide along with her!  was left in charge of a relation as caretaker until such time as the she might come back.


But Johanna never returned - she wandered all over Europe in her Rolls Royce. When World War I broke out, she took refuge in Switzerland which she found very pleasant indeed and remained there until she died 30 years after she left South Africa.


The letter was recently give to me by Jo and Jan Wicht. Jan is the brother of Joan Fulford (nee Wicht) who we met recently, just before she tragically died in a car accident on Hospital Bend.


Johannes wrote his letter in1865 in what I presume was then known as Cape Dutch:


The English translation is:


Saturday, Capetown, the 25 August 1865
Dear Child
Your letter of Thursday the 24th of this (month) I received yesterday the 25th of this (month). I was really glad to read that you all have arrived safely through the Lord's goodness at your destination. I was very worried about the strong wind but I was glad to read in your letter that the wind did not blow that strong, and that Hennie and Johanna have slept well that night. Yesterday Fritz was with me, so I personally handed him your letter. He is well. Take care of the little children. Keep them out of the evening air. We are also still fairly well, except that I am so depressed. Write me again soon.  Kiss Hennie and Johanna from us and receive greetings and hugs in the spirit from us all. Furthermore I ask God’s grace and protection for you all. With all love and regards, I call myself your good wishing Father
Johannes Hofmeijer
P:S: I expect this coming Monday or Tuesday again a letter from you! Do not fail to write. It only costs one penny. I wished I could receive a letter from you every day. Do not disappoint me now. I hope that if nothing intervenes, to surely receive a letter on Monday or Tuesday from you. May the Lord be and stay with you and your little children
Live well.
Your Father J. Hofmeijer


Note the spelling of Hofmeijer - I would be interested to know when it became Hofmeyr.

Mermaid Cottage
Wicht Family Home from 1850 to 1952
In 1850 Mermaid Cottage was bought, as a summer residence, by Mr Johan Frederik Wicht (see note i) (1923-1907) who according to the Almanac was a `Capitalist'. This, no doubt, sounded forbidding to some ears, but Mr Wicht, it seems, was a benign capitalist. For a contemporary advertisement of the sale of some Wicht property advised the public that Mr Wicht and his brothers were `landlords of the old type, who could never fall into the modern system of high rents'. Mermaid Cottage, from being a mere summer retreat, in time became the permanent home of the J. F. Wichts. The Sea Point property covered almost the entire area of the seaward `bulge' with no Beach Road, then, to truncate it The house was enlarged and a second storey was added, so that the place now dwarfed little Triton Cottage, adjacent.

J. F. Wicht died in 1907. His house was left to his four grandchildren (ii below), with the proviso, however, that his only surviving daughter, Miss Johanna, should enjoy the use of it during her lifetime. Some time previously Mermaid Cottage had been renamed . As children we were always rather saddened by the tale of an unhappy love affair said to have taken place at the former Mermaid Cottage. The gentleman of Miss Johanna's choice could not be approved by her stern parent: the suitor was forbidden to call again ... But why, we persisted, was the name of the house then changed? `You remember the story of the Forsaken Merman,' was the reply, `well, in a different sort of way, there can also be forsaken Mermaids ... '
Suddenly, in 1912, Miss Johanna startled everyone. Life as lived in suburban Sea Point had, for her, become intolerable. `Comfortably off', and free to wander where she chose, she packed up and went to . What was more, though, her car, chauffeur and aide went with her. This was 1912, when few people in Sea Point possessed a motor-car. was left in the capable charge of a relation who should act as caretaker until such time as the lady might come back. But Miss Wicht, it seemed, had no great desire to return. She wandered over Europe in her Rolls Royce-and never saw again. In any case she was soon caught by the First World War, and found a pleasant place of refuge. In that country, too, she found refuge while the Second War was being fought, and there she died, some thirty years after abandoning . Thirty-four years had then passed since the death of J. F. Wicht, and his grandchildren, the heirs to Rapallo, had now no occasion to use the house. It was now 1941, and the war at sea had come close to . , accordingly, was handed over by the heirs, on loan, to the Red Cross Society of South Africa. The place was turned into a sick­bay for men of the Royal Navy, many of whom, thus, found themselves made welcome in one of Sea Point's oldest homes. After the war the place, in 1952, was sold. Every square foot of ground was then built over and the vast block of Rapallo Flats was erected on the site. remained in the possession of one family - the Wichts - for just over a century.
(i) His wife was Geertruida Aletta Hofmeyr, one of three known Wicht-Hofmeyr marriages.
(ii) The four grand children were:
Johan Hendrik (Fritz) Wicht married Dolly Hastings
Louise Ditton (Lulu) Wicht married Thomas Yates-Benyon
John Ditton (Jack) Wicht married Esme Green
Hans Heinrick (Heino) Wicht married Suzie Hudson
Note: If any of the family have painting or pictures of Johan Frederik and offspring, please do email or post it to me at david@wicht.co.za.
0 comments

In The Attics Of Our Past Our Present Is Stored